We at the North Down Model Aircraft Club take great pride at our success in the tuition of newcomers to the sport of model aviation.  We can cater for all of your needs from advice, obtaining your first trainer and going solo, right through to passing your 'A' and 'B' certificates with the BMFA achievement scheme.

This sport isn't for everyone so your first port of call should be to contact the club some Saturday at our flying site at Kirkistown and watch what goes on.  We recommend this before you purchase any equipment.  Feel free to have a talk with the pilots and ask of them their views on their equipment, the training programme or even what they would change if they had to do it again.  You may even be lucky enough to find one of the instructors (for a nominal cost of fuel etc.) willing to instruct you on his own machine with buddy lead, leaving the major cost of a model to a later time if you decide that the sport is for you.  Some will even provide training throughout the week depending on what is suitable to both instructor and student.

The minimum requirement needed for your initial outlay includes:-

a:  High wing trainer of at least 1470-1530mm (58-60 inch) wing span, either 3 or 4 channel.  There are lots of excellent ARTF (almost ready to fly) models available which can be assembled in a few evenings.  Some even in an hour or so!  Seek advice on these.

b:  A good glow engine (or electric motor) within the recommendations for the model, e.g. if the manufacturer recommends a 40 to 46 size engine for the particular aircraft, go for the 46.  It will be slightly more powerful but the throttle control can take care of this.  Electric models are becoming evermore popular and with the ongoing development of battery technology and motors, electric powered planes can now match the performance of those powered by glow or petrol engines.

c:  The best radio transmitter and receiver that you can afford complete with servos.  We state this because the radio equipment can be interchanged for every model that you will ever own.  The majority of members use either JR or Spektrum transmitters.  In addition, you should have support equipment such as fuel, starter battery, glow starter and leads, along with some tools.

Club flyers use either a 35MHz or 2.4GHz transmitter.  Prior to the arrival of 2.4GHz equipment, all flyers had to ensure that the frequency of their transmitter didn’t clash with that of someone else’s equipment.  Nowadays, 2.4GHz transmitters are popular because any number of pilots can fly at the same time without a clash of frequencies.  It is therefore recommended that anyone starting out should purchase a 2.4GHz radio set.  Again, it is best to seek advice before parting with your money!

Before commencing on your training, your instructor will ensure that you have the necessary equipment and that your pride and joy is fit to fly.  He will fly it, trim it, point out any problems and then correct them, and then fly it again.  This time he will check the handling of the aircraft at high and low speeds, climbs and dives and may do a few mild aerobatics.  After this, and when the instructor explains what the controls do, it’s time to embark upon your training course!

The N.D.M.A.C. follow the syllabus laid out in the approved BMFA handbook, 'Up & Away'.  We recommend you obtain your copy and read it (obtainable from the BMFA).  It explains the training programme and the relationship between instructor and student.  Some students have also found that using a computer simulator has been a useful way of gaining some experience.

If you still have your heart set on learning to fly a radio controlled aircraft, your next step should be to contact the Membership Secretary, Peter Moore.  He can advise you about membership of the Club.  Do please remember that the BMFA will permit you to have a 'hands on' flying experience during three visits to the North Down Model Aircraft Club.  Their insurance will cover you on these occasions but after that, you need to purchase your own insurance from BMFA and apply to join the Club.

If you require any further assistance don't hesitate to contact any member of the committee all of whose names appear on the contact page. 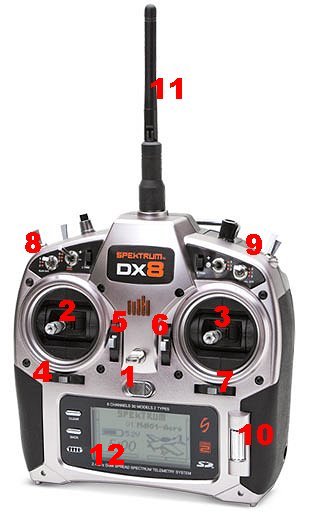 The photo illustrates a typical 2.4GHz transmitter, the Spektrum DX8.

2: This is the rudder and throttle stick (control).  When you move the stick from left to right (or right to left), instead of the whole plane banking, the tail of the plane moves from side to side.  This control is used more when you do aerobatics and also when you want to adjust the direction of the aircraft during its take off run.  When the stick is pushed up (towards the top of the transmitter) or down (towards you), the power of the engine is increased or decreased (called throttle control). Pushing it up makes the aircraft go faster and puling it towards you reduces speed.  When learning, you tend not to touch the throttle stick too much but when you are taking off, landing and doing aerobatics it is constantly in use.

3: This is the aileron and elevator stick.  Moving the stick sideways controls the ailerons, making the aircraft bank and go into a turn in the direction of your stick movement.  Too much movement of the aileron control will produce a roll.  Pushing it upwards (away from you) makes the aircraft dive towards the ground – use with care!!  Pulling the stick back will produce a climb and if the control is held on, the plane will loop.  It is important to realise that only very tiny movements of stick 3 are required in order to maintain normal level flight.  A common fault with beginners is to over control the aircraft making its flight path very erratic.  A more advanced pilot will be using both sticks 2 and 3 continuously to produce a range of aerobatic manoeuvres.

4/5/6/7: These little dials or sliders are called the trims and they produce very slight adjustments to the airplane’s rudder, elevator and ailerons to make it fly straight and level or, in the case of trim 5, to adjust the idle speed (tick over) of the engine.  Normally these controls are adjusted by only a small amount and once the aircraft is flying straight and level they are not disturbed.

8/9: These are the rate switches controlling the elevator (switch 3) and the ailerons (switch 4).  They allow you to change the sensitivity of these controls (i.e. how much the control moves for a given stick movement) and are used mostly in aerobatics.  Normally when learning to fly it is best to use the low rate setting to keep the aircraft flying smoothly.  Your instructor will help you to adjust these controls.

10: This is the rolling selector which allows you to change the programming settings within the transmitter.  All modern transmitters are computer controlled and incorporate appropriate software to determine the settings.  Control 10 is used to select the correct settings for each aircraft.  Some transmitters can store control programmes for as many as thirty aircraft though it may be a year or two before you acquire that many craft!

11: The aerial is used to transmit the electrical signals to the aircraft receiver which then decodes them and sends appropriate instructions to the servos.  A servo is basically an electric motor which drives the aircraft’s rudder, ailerons, elevator and throttle.  A battery inside the plane powers both the receiver and the servos.

12: The LCD screen gives you vital information such as the state of your transmitter battery, the position of the trims and which model you are flying.  The transmitter contains settings unique to each aircraft that you have programmed in and will only let you control the plane when it is correctly selected in the transmitter’s menu.

If you are a beginner, much of this may seem complicated but please be assured that your instructor will help you to understand it all and very soon you will feel confident and competent.  If you would like any information at all about getting into model flying, please send an e-mail to Peter:          and we will get back to you asap.